Are there Hindi Muslims

"I was never like you and I will never be like you either." This is how Aslam answers the above-mentioned, almost formulaic repeated sentence, which Indian Muslims say not only in the film. With this, the director Rakesh Omprakash Mehra succeeds in exemplifying the positions among Muslim Indians regarding their integration in Indian society. If the worried father arouses sympathy despite his severity, the brother, ill-fitting beard, represents an extreme position. He is not only reminiscent of a fundamentalist in appearance. While Aslam is more of a new phenomenon in contemporary film, the other two Muslim characters are frequently seen guests in mainstream Indian films. 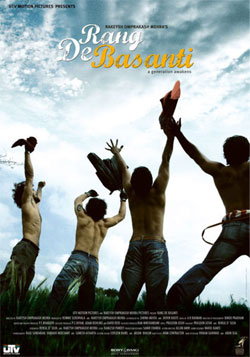 "Rang de Basanti" (2006) succeeds in taking up the discussion about India and its dealings with the minorities and giving it a historical dimension through the trick of a "film within a film" about the Indian struggle for independence. While in Ashutosh Gowarikers "Lagaan" a 19th century village community in which members of castes and religions of various kinds coexist and beat the British in a cricket match plays "Rang de Basanti" in the present day. The characters are modern and secular. "Rang de Basanti" is an exception in Bollywood, as is "Lagaan" (2001). It remains to be seen whether there will be imitators. Both films star Aamir Khan, which didn't stop him from being in "Fanaa" (2006) playing a Muslim Kashmiri terrorist.

While in the movies "Raj" reigns, the "Khan" belongs to the regents of Bollwood. In commercial Hindi cinema, Muslim Indians play a major role not only as stars, but also in many other elementary areas of the film industry, such as music and text composition. But on closer observation it becomes apparent that the (male) Muslim film stars in particular hardly play a Muslim hero. The hero is still called Raj. But this hero is embodied by a Muslim. Raj is the epitome of the characters of the 1990s who especially made Shah Rukh Khan famous. In these films he mostly plays a traditional but modern urban Hindu Indian named Raj. In his almost twenty-year career, however, he has only played a Muslim twice.

The nonchalant way of dealing with religion has been a defining feature of Indian film from the very beginning. However, this does not mean that representations that postulate exactly the opposite are excluded. Sunny Deol films that are ultra-nationalist and anti-Muslim, such as his box office hit "Gadar: Ek Prem Katha" (2001), resulted in a number of such films. They were watched as enthusiastically as films in which religion remains uncommented and is portrayed as a positive part of everyday life. In the bloodthirsty film "Gadar" - a Sikh marries a Muslim woman during the partition of India - the main actor is said to have sentences like "Hindustan murdabad" (Death India) say if he converts to Islam out of love for his wife, as if it were part of the creed.

Bollywood moves between the extremes of the woodcut-like Muslim who is between courtly Nawab culture and Islamist terror. There are films that try to achieve a secular tenor, but often Muslims simply do not appear, any more than other minorities. When they do, they are either very good or very bad, but rarely normal. They often remain exotic.

The director Nagesh Kukunoor, on the other hand, takes a different approach. He is settling two of his most successful films, "Dor" (2006) and "Iqbaal" (2005), in Muslim milieus. Religion is just one of many factors in his characters' lives. But he also locates them in rural regions. An urban Muslim is seldom characterized outside of the Muslim-Hindu conflict field.

Bombay to Bollywood: What the Two Nation Theory Taught 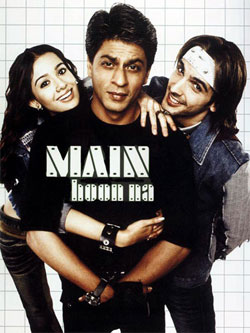 The division of India is and remains the dominant motive in dealing with Muslims. This is also evident in the film. A good example of an entertainment film that treats a serious subject with due respect is "Main Hoon Na" (2004) by Farah Khan. The country's two top Muslim stars, Naseeruddin Shah and Shah Rukh Khan, play Hindu members of the Indian army. Sunil Shetty plays the terrorist who - Warning! - is not a Muslim. He is an ex-soldier in the Indian Army who hates Muslims for purely personal reasons. His hatred also relates to the Indians who are working on a peace project between India and Pakistan that he wants to sabotage. In this masterpiece of popcorn cinema, Farah Khan manages to convey a message that is very moving; At the latest when she shows the Indian-Pakistani prisoner exchange, the message is clear.

India's grand seigneur of film, director Yash Chopra, is himself a victim of the division. He continues in his last film "Veer & Zaara" (2004) a memorial for a common future for Muslims and Hindus. Whereby the hero (Shah Rukh Khan) embodies a Sikh. He only shifts the problem out of Indian society to a binational problem, which is also an internal Indian problem, namely the relationship with Pakistan.

On the one hand, there is the accusation that India's Muslims are to blame for the division, and on the other hand, the question of loyalty is constantly being asked anew, after every Indian-Pakistani crisis, after every attack and increasingly after September 11, 2001 even the stars do not elude themselves. 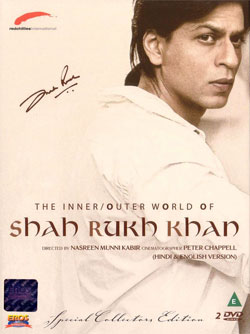 Many Muslims worldwide, but also many Indians of all religions, are proud of Shah Rukh Khan's success. For 60 years of independence he could be wrapped in the Indian flag as the embodiment of the Indian dream of a secular society in the Times of India consider. He is the only one of the khans to take a proactive approach to his Muslim-Indian identity. "He made it sound cool to say inshallah and mashallah," said Javed Akhtar of Shah Rukh Khan. "The Inner and Outer World" is a documentary by Nasreen Munni Kabir, which portrays the actor in his private everyday life and star life. One of the key scenes in "Inner World" is a prayer ceremony. Hindu and Muslim traditions find their place on the house altar, the children of Khan speak the Gayatri mantra as well as the Basmala and Fatiha.

In this documentary, filmed with a watchful eye, Khan is also shown once at prayer in his school church, during Muslim prayer in front of his parents' grave and at Diwali-Firmly. Especially in immigration societies with Muslim minorities, these scenes are told like mantras in fan forums, as they celebrate something that represents a longing for these descendants of non-European migrants. That it is possible to be a modern secular Muslim who combines tradition and modernity. Shah Rukh Khan gives a face to this possibility. This triggered violent reactions in many fan forums, ranging from sympathy, identification, enthusiasm ("I'm just as Muslim as he is. I believe and am modern.") To horror ("I can't believe this man is a Muslim." He, of all people, belongs to Islam. ") Are enough.

A professor at the University of Bombay said to me: "He is so successful because he does not correspond to the image of the average Muslim in India." In other words: he is educated, belongs to the middle class from New Delhi, attended a Christian school. He embodies the global modern star. At the time of our conversation the Indian version of "Who Wants to Be a Millionaire", hosted by Khan, was on. This show is an institution that has been hosted for years by the godlike actor Amitabh Bachchan. Evening after evening Khan greeted all of India with the greetings Salaam, Namaste and one Adab. My conversation partner noted that this would drive many Hindus offended "He says too often inshallah [God willing] and mashallah [God save ...]. " 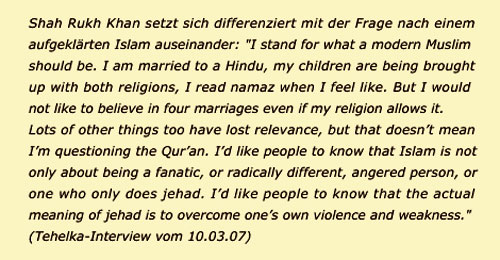 A few months later, after his film came out "Chak de India" (2007), the discussion about Shah Rukh Khans raged "Adab", only to a lesser extent in the media, but all the more vehemently in the discussion platforms on the Internet. As the popular columnist of the Times of India, Shobha De, in August 2007, Shah Rukh Khan as "neo-musselman" describes, which she would also like to see in politics, this could be seen as a successful example of the secular ideal and the good integration of Muslims in Indian society. But if you read the comments on this article and the discussion specifically about this statement in many forums, then you will not get rid of the impression that there is still a long way to go ("These are the people who sneak our trust to the top to come. First they say Namaste and now they show their true colors and say Salaam. ";" He should show that he is Indian and Namaste say.").

But the "question of loyalty" also posed the "question of loyalty" that was considered to be serious. in the CNN-IBN Interview on October 14, 2007, the interviewer, Shah Rukh Khan, asks emphatically why he uses the Adab greeting and no longer says Namaste, why he emphasizes his Muslim identity so strongly. since 9/11 Even the currently greatest star in Indian cinema has to answer questions about terrorism and jihad again and again.

This post belongs to the focus: Film in South Asia.