Have you ever hit your own mother

What I hate you for, mother

Today I want to share with you this report of a mother who was beaten as a child and at some point began to hate her mother for many things. May we all work for a better future:

It is not easy for me to write about what I want to write. After all, love for parents is something indispensable in our culture. “You should honor your father and mother!” It is more than a Christian saying that admonishes us. It is a statement of our culture. How many times have I heard “But I am your mother!”, Which can be traced back to exactly: I gave birth to you and you have to submit to me - or at least not contradict yourself.

I had such a mother too. One who expected unconditional love from me - but did not give it to myself. Not unconditionally. Since my teenage years at the latest, however, my love was no longer what she imagined. It was turning more and more into the opposite of what awaited it. I started to hate my mother.

The fear and helplessness of a child

Maybe I had a childhood that wasn't all that unusual back then: I had two married parents, my mother, who mainly looked after me. She was there when I got home from school, she cooked and washed and took me to the playground. But if I violated her wishes and ideas, she struck. I remember well the number of times I was beaten as a child. By hand, even with objects. I remember trying to run away, but there was no escape in our small apartment. She caught me and struck. I screamed and cried. As I grew up, I wondered why none of the neighbors ever did anything, never got my screams answered. Sometimes they were answered by a "I'll give you a reason to scream right away!" From my mother. I also wondered why my father never intervened but accepted it that way. Or my grandparents, my aunts and uncles. Nobody did anything. I grew up thinking that this was the way it was and that no one would help me. I was noticeable at school, but not so much that I was really noticed.

Dealing with your own childhood

When I became pregnant I began to grapple with my own childhood. With what I would never wish for my child. There was so much that was on that long list. So much to do with my parents. I realized: I had a bad childhood. I myself was a little shocked by this realization. And no, I didn't love my parents. Even if they gave birth to me, even if they didn't starve me and sent me to school. I just didn't love her. Love was lost at some point when I realized that I no longer had to rely on her to survive. When I moved out, I also moved out emotionally.

I realized at some point that I hated my mother. Not just for what she did to me. Maybe she was overwhelmed, maybe she hadn't found out otherwise. I hated her for not showing any insight: “But what is the matter with you? Has nothing come of you? You are fine! ”She answered my questions. I had a good job, was married, had friends and was expecting a child. She didn't understand that it had hurt me very well. That it had robbed me of confidence, self-worth, belief in unconditional love. It had hurt me personally, and with it all those who never intervened.

It's so hard to do it differently

But I hated her for one thing in particular: that I wanted to be different as a mother and that it was sometimes so difficult. There was no way I wanted to hit my child, scream at them, or scare them. I wish I was so very different I read a lot of books, went into therapy and broke off contact with my parents. And yet on some days they are there, the sentences of my childhood. They're in my head, wanting to make their way over my lips. Sentences in situations in which I am overwhelmed. I never had a good role model as a mother. Situations in which I have to hold back in order not to be rude to my child. I never hit my kid and hopefully I won't. But the thought is there sometimes. I hate my mother for these thoughts, for these ubiquitous sentences that I know how much they would hurt my child's soul. I hate her for the fact that some days it is so difficult for me to be who I actually want to be.

It is worth doing it differently

Why am I writing all this down? Because “It didn't do you any harm” is not true. Because beating leaves scars. Sometimes it's not that obvious how deep these scars are. Sometimes people protect themselves and claim that it didn't harm them. Maybe because the realization I made myself is so painful. It takes strength to admit to yourself that what you went through was pretty bad. And that you weren't protected by the people who were supposed to protect you. It takes even more strength to do it differently. But it's worth it. Every child's laugh, every look my child takes tells me it's worth the effort. 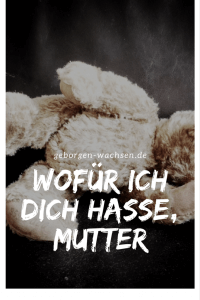