Why do we still allow religious schools

Judgment on the headscarf ban in schools: Put an end to dogma

Bizarre that Berlin still believes that teachers with headscarves are a danger to the peace at school. The opposite could be the case. 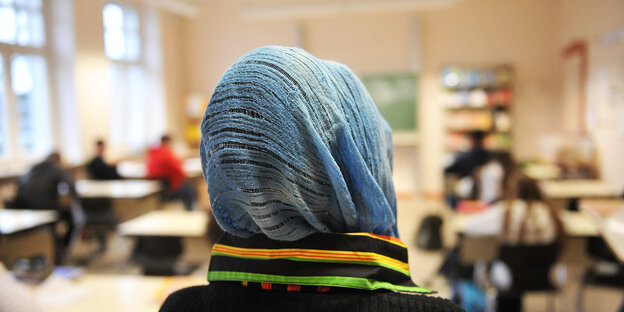 For more than 20 years, the question of whether women who wear the Islamic headscarf are allowed to teach in German schools has repeatedly preoccupied the courts and has led to heated social debates. The Berlin Neutrality Act, which prohibits teachers in general education schools, police officers and state officials in the judiciary from wearing symbols and clothing with religious or ideological connotations, has also long been contested. Last week the judges of the Federal Labor Court in Erfurt declared the law in this general public to be unconstitutional. Perhaps only going to Karlsruhe can save it. The question is: do we want this?

First a confession: like many Christian organic Germans - organic in the sense of biography, not biology - I felt uncomfortable for a long time at the idea that my child was being taught by a teacher wearing a headscarf. As an old leftist, I agree with Karl Marx and his dictum about religions. And although many see it differently, we in the “western” democracies have agreed that religious indoctrination has no business in schools. The "denomination-oriented" religious education shows that we do not live in secularism here, but there is not more religion in schools.

In many Islamic countries it is different. There, the containment of religion within state-established and socially recognized limits has not yet succeeded. On the contrary: since the mullahs took power in Iran in 1979, conservative to reactionary interpretations of Islam have been on the advance worldwide. This is also shown by the use of “the scarf”: The legal headscarf compulsory in Iran is probably the most extreme expression of religious paternalism, but in almost all Islamic countries there is now a strong pressure to conform to women to wear the scarf. Those who protest against this can sometimes end up in prison for years, as in Iran.

In this country, too, there are girls and women who are pushed or forced under the towel. Here, too, there are radical Muslims who reject democracy and secularization. The equation “headscarf equals Islamism” is still wrong. Of course, the headscarf stands for a conservative image of women and gender relations. But if someone wants to wear the scarf voluntarily - please. The fact that the majority society does not like this attitude is no reason to deny these people certain professions.

Incidentally, migration researchers say that the re-Islamization of many Muslim migrants or their children and grandchildren is also the result of their continued rejection by the majority of society. Anyone who has been signaled for decades that they do not belong, that they are different, whether in school, work, leisure or in citizenship law, withdraws to their "own" tradition, community, religion.

Couldn't a teacher with a headscarf have much better access to strictly Islamic parents?

In spite of all this, more and more migrants create social advancement - and more and more young women with headscarves are studying. But as if the majority society would prefer to remain cleaning or housewives, since the noughties many federal states have more or less explicit "headscarf laws" in place. The then "pioneer" of North Rhine-Westphalia was slowed down in 2015 by the Federal Constitutional Court. In the seminal judgment, the judges found that teachers with headscarves are not a general threat to state neutrality or "school peace". But of all things “Multicultural Berlin” stubbornly sticks to its neutrality law - with the argument that it would all forbid religious clothing, including the nun's habit and the Jewish kippah.

That may be the case on paper. In fact, the 2005 law was passed against Muslim women. This shows its genesis in the course of the headscarf debate at the beginning of the noughties as well as the argumentation of the Berlin education administration, in which until today only religious conflicts with a Muslim reference and only teachers with headscarves as a bad example are mentioned.

But even if you take the argument of neutrality literally: Of course, teachers have to be restrained in expressing personal views on religion or political preference. But whether they can do that and actually do it in everyday school life cannot be seen from their clothing.

What you can do: Make the requirement that all teachers adhere to the Basic Law - and check this on a case-by-case basis. In other words: the presumption of innocence applies to everyone, including Muslim women with headscarves. This is also the requirement that now applies in all federal states (except Berlin) in which there are regulations. Even Bavaria has declared that it will examine in each individual case whether a teacher with a headscarf contradicts the “basic constitutional values ​​and educational goals of the constitution, including the Christian-Western educational and cultural values”.

So why does Berlin stick to the dogma that teachers wearing headscarves are fundamentally a danger to school peace because they fuel religious conflicts - which undoubtedly exist in some schools? Conversely, wouldn't it be conceivable that a teacher with a headscarf would have much better access to strictly Islamic parents who harass their daughter with a headscarf or a swimming ban, and who would be more likely to convince her of the opposite than her Christian or atheist colleagues? Can a teacher with a headscarf not give Muslim children who annoy their classmates with food regulations (“gummy bears are haram”) much more credibly that their missoning behavior is out of place? We'll know soon. And that's good.