Do you speak crypto 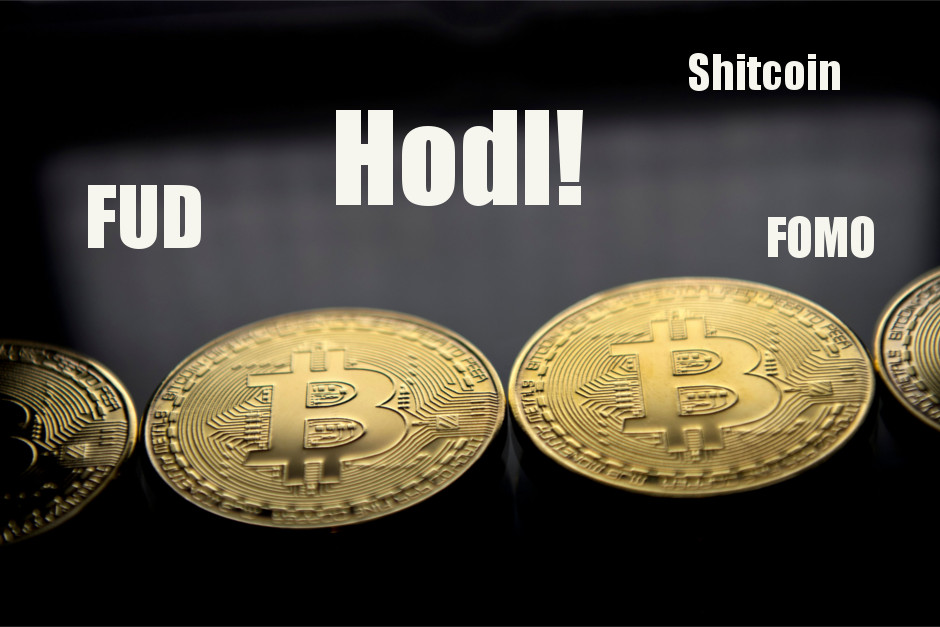 Bagholders are investors who have bet on the wrong (mostly exotic) crypto coin and now own a lot of worthless coins. They hope to recoup at least half of their investment one day. Which will never happen.

Bitcoin whales are big players in the crypto market with a lot of coins in their portfolio; mostly multi-billion dollar hedge funds. They are so big that they can manipulate market prices at will. Small fish and crypto sharks prefer to steer clear of them. The big Bitcoin whales include Pantera Capital, Bitcoins Reserve, and Coin Capital Partners. Bitcoin Dolphins are a bit smaller, but still move a lot of money at an average of 1,000 Bitcoin per transaction.

Blockchain Expert means someone who has seen some YouTube tutorials or a TED talk and is now soliciting money from VCs and attention from journalists. Meant disparagingly. Those familiar with the technology avoid being referred to as "experts" themselves.

Butthurt describes the place and feeling when your shitcoins have become worthless. Usually a painful feeling of shame, disappointment and fear of loss in the lower pelvic area.

Application example:
"Kevin lost over 10k. He is realy butthurt. "

Classic describes something that is more than what feels like two years old in the crypto scene. For example, Ethereum Classic.

A crypto anarchist hates the state, government and all surveillance services. Is a crypto investor by conviction. Despises obsolete, incompetent financial regulators - until he's scammed himself. Then he calls the SEC, the US stock exchange supervisor.

Dust transactions are transfers of very small amounts of Bitcoin that "clog" the blockchain and cause transfer jams.

Faucets, English for faucet, are websites that give out tiny bitcoin amounts or altcoins for free - mostly to newbies. The aim is either to advertise awareness of a new cryptocurrency, generate web traffic or generate money through advertisements.

In contrast to Bitcoins and all other crypto currencies, the so-called Altcoins, Fiat means traditional, centralized and regulated currencies such as euros, dollars and yen. Fiat is particularly despised by the crypto anarchist. Nevertheless, he still pays for his flat share and the food for his somewhat plump cat in euros because the landlord and supermarket do not want to accept his scamcoins.

A FUDster is someone who FUD, so "Fear, Uncertainty and Doubt" spreads in forums to crash currency rates. Related to the Panic Troll.

The fear of missing out in the face of steadily rising prices and the compelling desire to put all your money on a single card immediately in order to make a fortune within days.

The very first block in a blockchain that contains all transactions in a currency. For example, a new block with the latest transactions is attached to the Bitcoin blockchain every ten minutes. But Genesis was first and foremost.

Perhaps the best-known crypto idiom is the verb "hodl". An emotional, deliberately misspelled variant of the English "hold", which is intended to prevent Bitcoin owners from selling their coins when there are strong price changes. Often also in connection with "hodl the line" memes.

Newcomer, first-time investor, inexperienced coin dealer. Noobs are the long-time crypto trader's natural prey. Noobs buy coins at the highest prices, only to sell them in panic when the price falls. With their predictable behavior, experienced Bitcoin holders earn a golden nose when slaughtering noobs. Faucets are particularly popular with newbies.

A panic troll tries to convince other users on Reddit or 4chan that a crypto currency in which they have invested is about to collapse and is only scamcoin. Panic trolls spread FUD. Most of the time, they try to profit from the price falls, which were caused by their scare tactics.

Application example:
"Bitcoin is only scam. It's gonna be down within 2 hours. Sell ​​and thank me later. "
"Can someone block the panic troll?"

The pump-and-dump strategy (PaD) is the attempt to drive up the rate of a currency through untrue, exaggerated reports or comments in forums ("pump") and then to sell off overvalued coins ("dump"). Noobs in particular are falling for PaD in droves. Closely related to the shilling.

State of utter defeat. For example, in the case of an investment in a scamcoin - and the subsequent total loss.

Application example:
"Georg lost all his money cause he invested in Dodgecoin. He totally got rect. "

Scamcoins are worthless cryptocurrencies whose technologies do not generate any added value. They are used by experienced traders to pull off inexperienced noobs via pump and dump and to bring their property. But be careful: you must never start to believe in your shitcoins yourself. Otherwise you will soon be a bagholder and will feel the butthurt yourself.

Scammer is an insulting term for someone who has a different opinion than you in the crypto scene. Originally, it was meant by scammers who advertised shitcoins in forums. In the meantime, however, the following applies: the more experienced a trader is in the crypto scene, the more often he himself describes others and others as a scammer.

Shilling describes the attempt to positively influence the price of a crypto currency by reporting particularly benevolently in forums or blogs. The natural enemy of the shilling user is the panic troll.

Those who do shorting sell their holdings in cryptocoins and hope for falling prices in order to later buy back coins at a lower value.

Bitcoins that miners get as a reward for running the blockchain. These bitcoins are newly mined and have therefore never been issued. They are therefore “virginal”.

If a miner or a group of miners has 51 percent of the computing power with which a coin is mined, he can take over the network and rewrite the blockchain as desired. He can cheat himself with coins without being noticed in the blockchain or block transfers from others. A successful 51% attack destroys trust in a cryptocurrency and spreads (legitimate) FUD.