Turbo individualism in the corona crisis: The cynicism of the mob

People who have nothing more to lose take off the mask, are free in a socially destructive way. What to do? 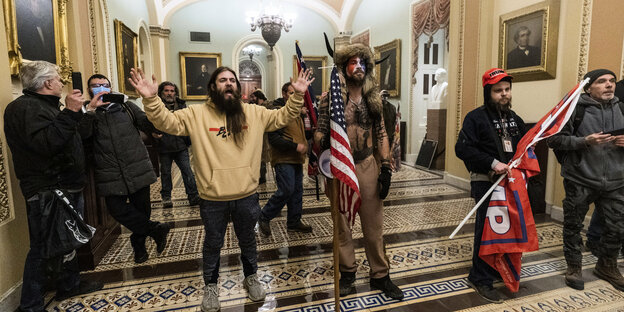 Trump supporters after the storm on the Capitol on January 6, 2021 in the White House Photo: Manuel Balce Ceneta / ap

The core of the uprising against the liberal democracies is made up of right-wing populist or right-wing extremist strategists who deliberately want to destroy them and use others to do so. That is why educated career enthusiasts are rallying for whom there was not enough elsewhere and who now become and can be something with Trump, Orbán, PiS or AfD. The main agitation group are people who have been socially and culturally relegated or who fear their relegation because, from their point of view, liberal democracy only works for others, but not for them.

A type or aspect that has so far been mostly ignored are people who are no longer interested in anything, what sets them free in a destructive way, which they now live out. That’s what I’m talking about below.

In the early 1980s, Peter Sloterdijk's “Critique of Cynical Reason” appeared, which can be applied to the type of educated person who articulates a high level of awareness of what is going wrong in capitalism; but that's it. Cynicism from above. One benefited in many ways from the “pig system”, as some leftists used to call liberal democracy - and wanted to ennoble oneself with enlightened criticism of the “conditions”.

No longer to be ignored

The new cynicism comes from Trumps, but also from below. It comes from people whose freedom in the sense of Kris Kristofferson's "Me And Bobby McGee" consists in having nothing to lose or to accept that. They have given up all hope that there is still something left for them in liberal democracy. It is different with the dangerous strategists and those who are prepared for violence and subversion, but if this type runs along to the Reichstag, Capitol or elsewhere, then everything is not at stake for him. But for nothing.

It's about hitting the shit so that the others can no longer ignore you, but have to see you. You can only feel yourself in the negation. This is also behind the claims made by millions and millions that Biden's presidency was based on electoral fraud. It is a defiant no to reality that is reduced to the reality of others.

"The cynicism of the rabble" is what Sloterdijk calls it in a clairvoyant essay from 2018, whereby, according to Hegel, rabble arises from poverty and the feeling of lack of rights and, for Kant, from the loss of social ties.

Both sides drop the masks

Today, turbo individualism is primarily about recognition by society. The lack of them is now compensated for by as violent a rejection as possible, which is a negative but strong form of recognition. As usual in human life, the explanation for one's own behavior is that the other person started (politics, establishment, left-wing liberals and other enemy images).

This text comes from the taz on the weekend. Always from Saturday at the kiosk, in the eKiosk, with a practical weekend subscription and around the clock on Facebook and Twitter.

Sloterdijk described this as the mutual termination of an "illusionary pact". The superiors no longer bothered to at least pretend there was a common good. And those below no longer pretend to believe in it.

Both sides dropped the masks, he writes. Which is an interesting picture inasmuch as rioting critics of the corona policy refuse to put on masks. In view of the pandemic, this is fatal in terms of health policy and shows lack of solidarity, but fits into this logic of “self-masking”, according to which one wants to make visible that everything has become irrelevant for oneself and that one owes nothing to the others.

With enlightenment, morality and the common good, one does not need to come to the type of cynical unreason, because against this the revolt, which from his point of view is enlightened, is directed. He thinks what he is doing is the only sensible thing in his position. So what to do