Are you the underachiever in your family

Unexpectedly poor performance (underachievement) in the context of special talents 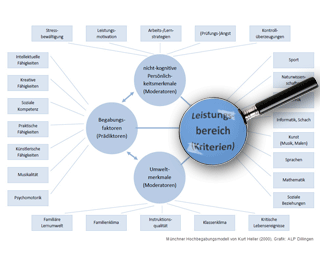 "Those who are highly gifted will show this sooner or later through high performance."

This assumption was held until the 1980s. Then, in connection with intelligence tests, it was noticed that around 12% (e.g. Rost 2007

) of the gifted, who were tested with IQ scores of at least 130, who did not show particular talent in very good (school) performance. If, at most, average (school) performance is determined for these learners, this is viewed as unexpected and the phenomenon is referred to as underachievement.

In connection with gifted students - not highly gifted - the opinion was widespread among teachers that many of them, too, did not perform at school that corresponded to their cognitive performance. This circumstance was mostly attributed to a lack of motivation to learn and perform, a lack of willingness to exert themselves as well as minimal work input and also to impairments caused by organic diseases, problems in the family or psychological or developmental disorders such as attention deficit hyperactivity syndrome (= ADHD). The research into the causes of school difficulties has become more and more differentiated over the years and rightly said goodbye to the reduction to the explanations that the learner is "stupid."

The résumés of geniuses who were unsuccessful in school, such as Albert Einstein, contributed to the belief that giftedness will always prevail in the end. However, not all gifted people become high performers or even geniuses in the course of their lives. Albert Einstein always emphasized that 95% of the success is due to the work and effort, only 5% can be attributed to ingenuity. Expertise research (see, for example, Ericsson et al. 2006) shows that learners generally achieve a satisfactory level of competence after about 40 hours of work in a domain; excellence in performance - e.g. from Nobel Prize winners, top managers, Olympic champions - only occurs after around 10,000 hours of improvement-oriented learning in their respective fields Domain of action reached.

It can be assumed that all kinds of impairments can lead to underperformance even in the case of highly gifted people, and sometimes in a serious way. It is therefore particularly important to find out the causes of poor performance and then look for ways to overcome the obstacles.

However, it is not appropriate to assume that every adolescent who shows signs of underperformance - e.g. great spelling problems or the non-mastery of basic arithmetic in the fifth grade or concentration problems - is highly gifted. The spread of such misjudgments is facilitated, for example, by publications such as "Dyslexia as a talent signal" (Davis, R.D. 2001). It is true that one should also consider the possibility of underachievement of a gifted person if an adolescent shows (partial) performance disorders or learning disorders, but relevant studies show that gifted people tend to show these impairments less often than other peers (Rost 2002; ISB- Guideline 2011, 61 ff.).

As with all forms of underperformance, the search for the cause is a complex task. It must be clarified with the learner, the parents and the teachers how the performance has developed at the latest from kindergarten to the time of the examination and what could have caused impairments. It is important to find out how, for example, a negative self-concept of one's own abilities arose or social or emotional immaturity, which is shown by the child avoiding contact with peers. The genesis of a possibly existing disinterest in school through to aversive attitudes towards everything that has to do with school must also be investigated. It is particularly important to see the individual resources or potentials of the adolescent and to use them to (again) build up a positive self-image in them. For example, a surprisingly high IQ value determined during the IQ test can strengthen the child's self-confidence. This also applies to the recognition of special abilities in individual areas, e.g. a pronounced sense of justice, a high interest in philosophical questions, special abilities in the artistic and musical field, pronounced logical abilities or a very great interest in a certain area of ​​knowledge.

All forms of support that are suitable for gifted students can also be helpful for underachievers (see under “Support”).

Hackl's classification can be helpful in the task of helping underperformers in a targeted manner. He differentiates between three different types of underachievers:

Since a complex network of causes often has to be identified and dealt with when promoting underperformers, all the usual funding options for gifted students must be taken into account (see under “Funding”) and, if necessary, combined. When choosing the funding strategies, Hackl's typology (see above) should also be taken into account, as well as the “class situation” in the Betts et al. Recommended special educational measures for the respective typical behavioral profiles of gifted people.

A special funding option - mentoring - is discussed in more detail here. This method has proven to be particularly successful in comparison with other funding strategies (see ISB guidelines, 129).

Mentoring is primarily based on the fact that there is a stable, trusting relationship between the mentor and the person he is looking after - the mentee. This is usually maintained over a longer period of time. Relationships are built up through talking to one another, getting involved and above all through the fact that the mentor believes in the mentee's potential, even if setbacks occur. Looking back at their own school days, many adults remember particularly well how encouraging and uplifting it was to see in a particular teacher that they trusted you, especially when this was clearly conveyed by the teacher.

A mentor, whether a teacher or another person, will consider different areas in contact with the mentee: e.g. learning coaching or the promotion of personal development and social competence through psychoeducation (= the joint consideration of psychodynamic and / or socio-psychological contexts) . This joint clarification of connections is also important so that talented underperformers get to know and understand their strengths and weaknesses better. Ultimately, it is also about looking for suitable opportunities for enrichment measures, e.g. finding suitable projects and intellectual suggestions that are not provided for in everyday school life (see also under "Funding").

Since the tasks of the mentor are varied and comprehensive and should possibly be fulfilled continuously over many years in order to be successful, these can usually not be adequately fulfilled by a teacher alone. The following model has therefore proven itself in practice: A person who has won the special trust of the mentee is looking for a support team and coordinates their various mentoring activities. The “trust mentor” himself maintains close contact with the mentee. This person can be, for example, a school psychologist, a counseling teacher, a teacher or someone from outside the school. It is important that all those involved are in constant contact and that the trust mentor looks after and accompanies the mentee centrally and regularly - possibly also his or her parents.

One Lecture above Paths to college For example, without having acquired the general higher education entrance qualification at the grammar school, you can find here: "Paths to the university"